P. Goldsmith Sons Co. is a sporting goods & baseball glove manufacturer, founded by Philip Goldsmith. Philip Goldsmith was one of the earliest of entrepreneurs who became involved with the business side of baseball. Born in Austria, 1844, Goldsmith came to the United States in 1861 with only a few cents in his pockets. In 1875, Goldsmith started to manufacture the first handmade baseballs. At that time, baseballs were composed of a core of rubber, a layer of string, and a leather cover, Goldsmith invented and patented a specialized machine to wind the string. Workers then stitched on the leater covers by hand and the ball was inspected for roundness, weight, size and perfection of seams. 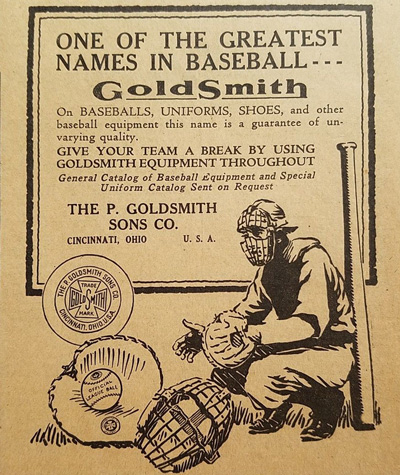 In 1885 Goldsmith was also making other kinds of sports equipment and had a national market for all his products. The company did well until Goldsmith passed away in 1894 – drowning during a family vacation in Wisconsin. Philips sons took over after his death, moved the company across the Ohio River to Cincinnati, and continued to grow the business. They reorganized the business concentrating on the manufacture of baseballs and sporting goods. The firm’s name was changed to P. Goldsmith Sons. 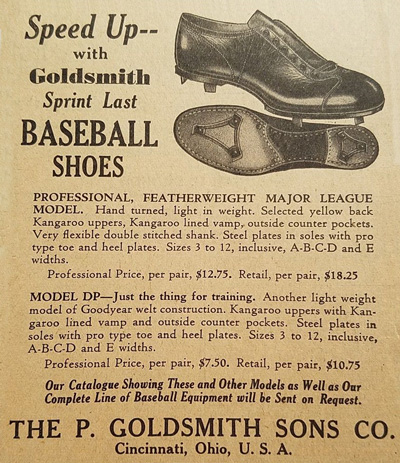 Especially Philips son Hugo turned out to be a manufacturing genius over the years with many patents to his credit. He stabilized a notoriously seasonal industry by carrying 700 different sports products for every season and sport, including baseball, boxing, football and tennis. In the throes of the Great Depression, P. Goldsmith Sons bought out two struggling sporting goods companies in 1936 & 1937, Draper Maynard and Crawford, McGregor & Canby Co.